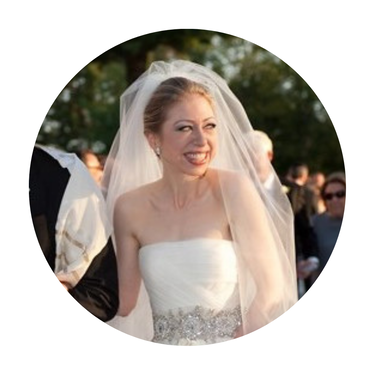 Why We Love Chelsea Clinton

1.  She is the ugly duckling who became a beautiful swan.   As an insecure, twelve year old in the White House she was lampooned by Saturday Night Live and the butt of cruel partisan jokes. Today she is a beautiful young lady who is having the last laugh.  She is “the comeback kid of the comeback kid.”

2.  During her time in the White House she remained low-key.  Because Chelsea refused to answer critics or even her parents’ political antagonists during those years she became a blank slate for Americans of all stripes and opinions to write on.  They could imagine her feelings in their own way as they watched the great personal story of her family unfold.

3.  She is a survivor.  We watch reality shows with less drama than Chelsea has suffered.  To offer a comparison, the last president to be impeached was Andrew Johnson.  His son was terribly traumatized by the process and apparently took his own life shortly after the Johnson’s left the White House.  I once asked George W. Bush, “Which is harder, running for president or watching your father run for president?”  He didn’t hesitate.  It was harder to watch his father run.

We may never know the pain that Chelsea Clinton suffered alone, without a sibling or friend to trust, as every crude and intimate story of her parents’ life was sent over the transom.  But in spite of the odds she has clearly landed on her feet.  She has been resilient.

4.  She has maintained her dignity.  She is Rudyard Kipling’s hero, who kept her head when all around her were losing theirs.  She has not become bitter. She has never answered back the terrible things that have been said about her or her parents.  Not a word to a friend has surfaced.  She has remained transcendent, above the angry furor raging beneath her.
By Doug Wead