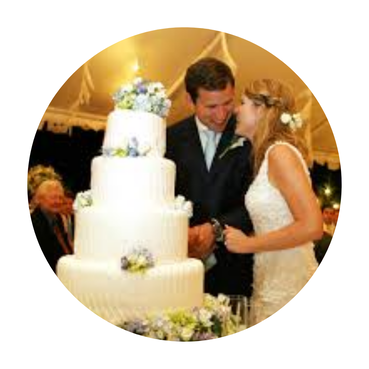 She Made the Cake for Jenna Bush

The phone was ringing.  It was Lindsay and Tim’s wedding planner calling.  “Mary Jane,” she said.  “I have a little secret for you.”  There was a pause.  “The wedding cake that you are going to be making is for Jenna Bush!”

Mary Jane was speechless.  A wave of emotions swept through her.  She had fantasized many times of just such a moment, preparing a cake for a celebrity wedding, but it had never entered her mind that it could be possible.

Her sample cake in February had been a big hit, she was told.  The cake was delivered to Dallas and used for a dinner hosted by the Bush family for foreign dignitaries, who enjoyed it as part of their dessert.

The woman on the cell phone said, “You can’t tell anyone right now until we find out how Mrs. Bush wants to handle the press releases.”  Mary Jane agreed, and they finished the interesting conversation with the last words from the planner, “You can tell your husband.”

That night, Mary Jane couldn’t sleep.  She tried.  All night long she tossed and turned. Step by step, she went over the cake-making process, the delivery, and the other orders looming over her, and was overwhelmed by all that could go wrong.  She didn’t tell Tom until the next morning.  At least one of them would get some sleep.

He was half awake, lying next to her in bed, when she broke the news. “You know that cake we are doing for the couple up near Waco?”

“Well, you’re going to want to go on that delivery with me.  The cake is for Jenna Bush!” .